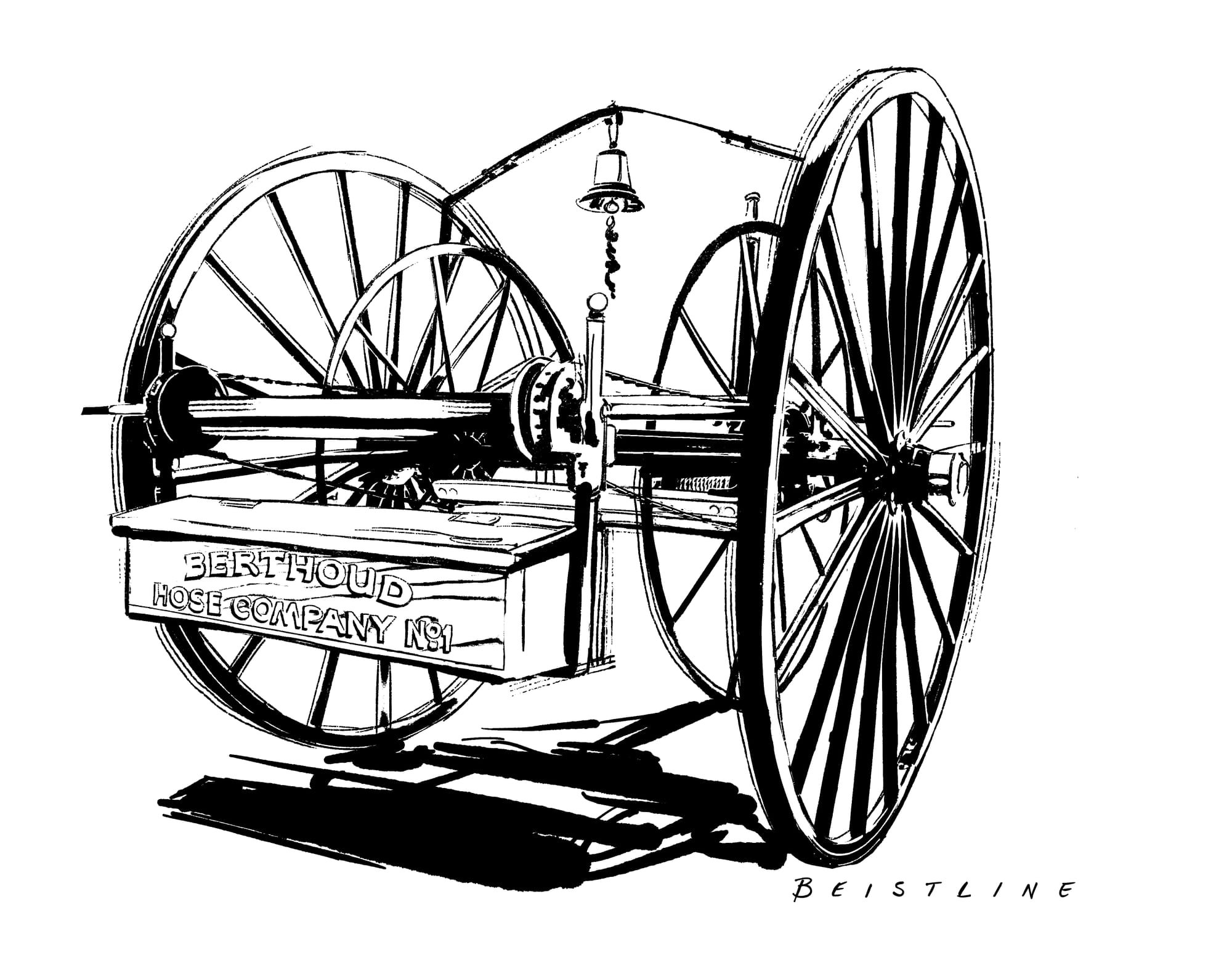 Today’s firefighters arrive on the scene of an emergency in a huge six-wheel toolbox called a fire engine. This toolbox holds all the essentials from emergency medical supplies to hose, nozzles, fittings, forcible entry tools, even a small water supply and tremendous pumping capability necessary to deliver the water on the fire. 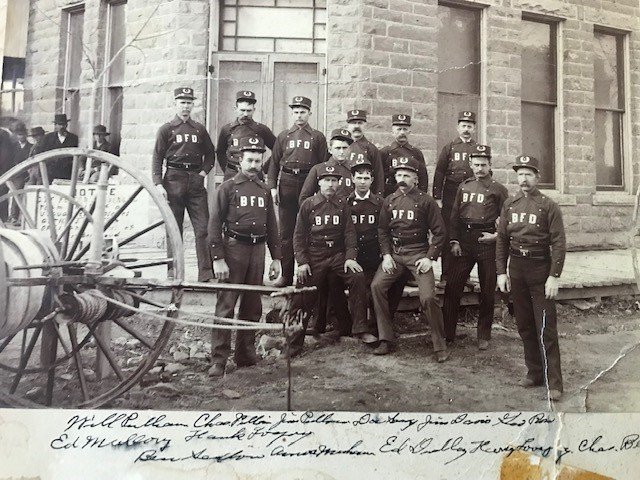 Berthoud’s firefighters of yesteryear were not quite as lucky or prepared. The means of putting the “wet stuff on the red stuff” meant finding a fire hydrant close to the fire, hoping there was enough water pressure and volume in the wooden water main to reach the flames, attaching a hose and nozzle to the hydrant and with a little luck and a lot of work, extinguish the fire. Transporting the hose, nozzle, axes, lanterns, and buckets to the scene of a fire was accomplished using this very hose cart powered by four to twelve volunteer firefighters physically pulling the cart through the streets of Berthoud.

The history of the hose cart goes back to 1888. Just six months after the Berthoud town government was formed it was determined that firefighting capabilities were essential. A fire committee was appointed by the board with instructions to investigate the cost of a fire hose cart with tools and 600 feet of fire hose. These tools and equipment were purchased a few months later for the stately sum of $1,500.00. Not long after the arrival of the new cart, a group of volunteers were recruited, and the Berthoud Hose Company #1 was born. The cart was housed on fourth street, in the hose house that the volunteers built themselves for $250.00. If a fire was detected in the community everyone knew to run to the hose house and ring the bell in the hose tower to alert the hose company. At the sound of the bell the volunteers would rush to the hose house, strap-on a wide leather belt, attach the rope on the hose cart to the belt and take off pulling the cart as fast as they could through the streets of Berthoud.

The photo above is the very hose cart that we have worked hard to restore, as seen in the below photo. The only modifications known to the original cart was the addition of the bell to alert people to move out of the way for the cart and in later years a wooden box was added to carry additional tools. In the early 1920’s the “T-Handle” on the tongue was removed and a hook installed so that the cart could be pulled behind a car. 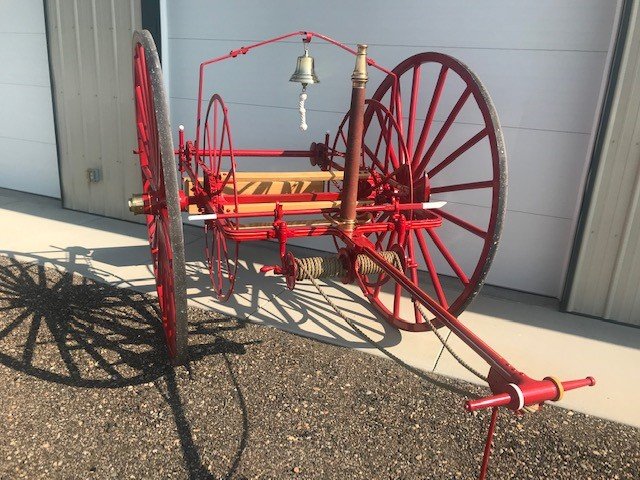 The hose cart remained the mainstay of the Berthoud Hose Company until 1927. This was the year that the town council purchased a GMC truck with a gear pump and a fire body that was built and installed by Julies Pearse Fire Department Supply Company in Denver, Colorado. The truck was equipped with a pump capable of pumping 350 gallons per minute, an electric siren, a hose bed capable of holding 1,000 feet of hose, a chemical tank that enabled the firefighters to extinguish a small fire without hooking to a hydrant, and a variety of nozzles and tools. It saved the volunteers from pulling the cart but the truck has no top, windshield, or heat. 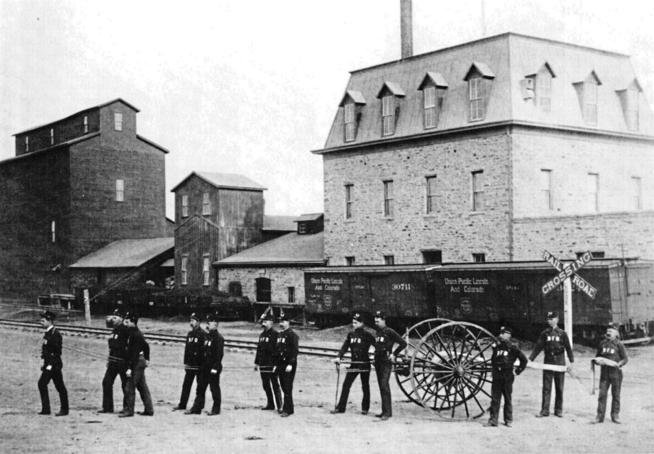 At this point, the volunteer organization was renamed, Berthoud Fire Department and in the early 1950’s the station was relocated to a building on Massachusetts Avenue. In 1954, the department took delivery of a new fire engine and as a result the hose cart was moved outside behind the station, chained to a power pole. Time went by and one day someone noticed that the hose cart was gone, and no one seemed to know where it went. An unsuccessful attempt was made by the volunteers in the late 1970’s to try to find the cart. In the mid 1980’s, aided by some of the retired volunteers it was discovered that the cart was being used as a lawn ornament at a home in Bailey, Colorado. An agreement was reached, and the volunteers were able to bring the cart back to Berthoud. Approximately the same period the volunteer firefighters sponsored a community project to restore Engine 1. A mass mailer went out to the citizens explaining the project and asking for donations. The department received almost $8,000.00 and was able to restore the truck. To the cheers of the citizens both the cart and Engine 1 participated in the Town Centennial Parade Celebration in 1988.

In 2019 a group of retired firefighters formed a nonprofit named Caretakers of Tradition to pick-up efforts started by Firefighter/Fire Investigator Lee Brian Scott to recover, collect and exhibit the firefighting memorabilia of the Berthoud community. Soon after, Lee passed away and he left funds to the nonprofit to be used to continue his efforts. It is with these funds that we were able to have the one hundred- and thirty-three-year-old hose cart restored and ninety-four-year-old Engine looking like new again. Thank you, Lee and all the Scott family for making helping us preserve these community treasures.